Not too long ago I was asked to investigate why a clients location tracking of RF tags was so inaccurate. The information I had was that the RF tags were 2.4GHz tags, and not associated to the wireless, other than that no information given.

The customer also had no idea if the site meet their coverage requirements, I attended site to conduct a site survey and investigation of the tracking issue.

Then I first got to site, a quick visual look at the AP placements, told me that it looked like an RTLS deployment had been done, the APs were also Cisco 2800 series.

Before I started the survey the customer told me a key piece of information that would have helped before going to site I was told “location accuracy on the 5GHz clients is less than 5 meters and well within what we are expecting, but the 2.4GHz are over 20 meters”

I open up Ekahau take a quick look, interestingly i cant see half the APs on 2.4 GHz 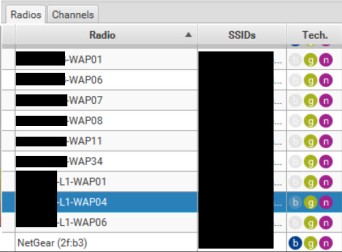 But over on the 5GHz there is heaps:

Then I notice hang on there are 2 lines for WAP02, WAP03, etc. I get the customer to ask their network admins for some screenshots of if Cisco’s Flex able Radio Assignment (FRA) was enabled, and sure enough it was.

I then went through the list of APs that had gone dual 5GHz and found interestingly enough it was mainly the perimeter APs, but in large areas of the site you were not meeting the RTLS requirements on the 2.4GHz bands.

The recommendation to the customer to disable FRA, and look at where there is too much CCI on the 2.4GHz turn the XOR radio to monitor mode manually.

Interestingly enough the next day I was at another customer site, and FRA was running, and wondering why they had decided to turn it on, so I asked and was told, we just implemented all the “best practices” things on the WLC login page:

Its interesting some of these best practices are good, but some require the person implementing them to actually understand the features and what impact it will have in their environment.

2 thoughts on “Issues with Cisco FRA and Location Services”

About wireless and some other stuff